Brooke Southall at RIABiz.com asked me to send him some comments on the “Mallouk mega deal” a couple weeks ago. Brooke’s article published the next day – you can read it here: Tiger By the Tail: What to Make of Peter Mallouk's Deal with Tony Robbins and Where the Unlikely Pairing Might Go from Here. 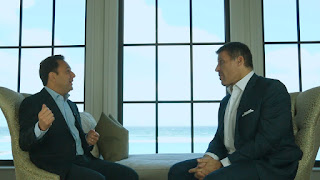 Here are my comments in their entirety:

I have to admit that at first I scratched my head when I read that Tony Robbins had joined Creative Planning's board of directors and assumed the role of Chief of Investor Psychology at the firm. But the more I thought about it, the more it made sense that of course Robbins could leverage his Six Human Needs principles to help advisors do a better job working with their clients.

One of the biggest complaints clients have is they do not feel their financial advisors really listen to or care about them. So any advisor who is fortunate enough to be on the receiving end of Robbin’s training and advice will surely be in a better position to not only attract new clients but to retain the ones they have and, more importantly, move clients from being simply content to being totally enthralled by their client experience.

It was also great to see Peter Mallouk’s post on LinkedIn about the firm’s decision to as of April 1st 2016 start giving 100% of the profits derived from its private client insurance practice, which includes all term and permanent life insurance, disability insurance and long term care insurance, to charity. He acknowledged “the perception and reality of conflict” that has until now existed and said that the firm felt so strongly about removing it that 100% of the profits going will now be going to charities.

While some in the financial advisory world will throw darts at this partnership (after all, haters will always hate), it is hard to argue with the star power in this constellation.
A quick look at the Creative Planning Facebook page (https://www.facebook.com/creativeplanninginc/) reveals a stunning array of recent media attention – Good Morning America, The Today Show, The Street, Bloomberg, and more. Robbins and Mallouk must have had a blast on their New York Media Tour in early April. And you can’t put a price tag on the 13-minute video in which Robbins and Mallouk talk about the Four Deadly Horsemen (https://vimeo.com/160298589) that investors must avoid – that video clip alone is priceless.
The icing on the cake is that Robbin’s new edition of his New York Times best selling book, Money: Master the Game, which was just released in paperback form, features fresh insights from Mallouk. I doubt that it’s a coincidence that the paperback was timed to come out in tandem with the Creative Planning announcement – and it was total synchronicity that the DOL finally signed into law the new fiduciary rule at approximately the same time as the Robbins / Mallouk fiduciary PR blitz.
But here’s the bottom line: The Robbins / Mallouk announcement and public awareness campaign provides benefits for the entire fiduciary advisor community.
While the business benefits for Robbins, Mallouk and Gupta are clearly evident, they appear to be doing it for the right reasons – and all true fiduciaries should be cheering from the sidelines. Better yet, fiduciary advisors everywhere should see this as a great wave to ride.

My advice: Put some extra energy in now to ramp up your consumer education efforts. Amplify your own voice and applaud your fiduciary peers while working to enhance your own unique value proposition.

April is Financial Literacy month and with all the DOL news coverage it’s the perfect time to join the fiduciary chorus.
Posted by Unknown at 9:58 AM 6 comments

Insights from Financial Services Consultants You Won't Want to Miss

These three subject matter experts shared some pretty awesome insights and observations with me last month. They all talk about where they see challenges and opportunities within the financial services profession.

Stop what you're doing now and listen to one or more of these audio clips. You'll be glad you did. 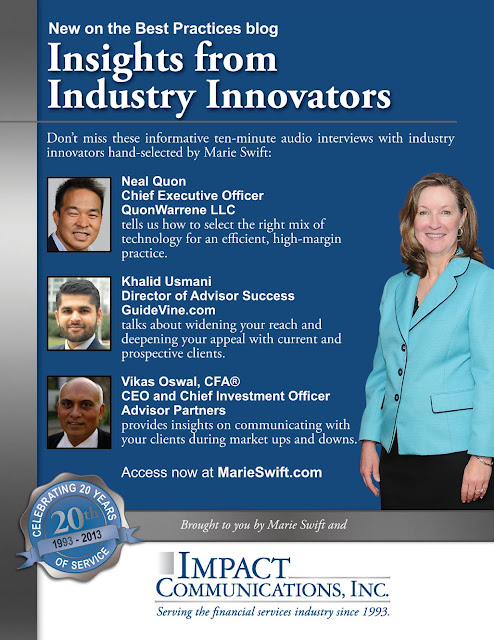